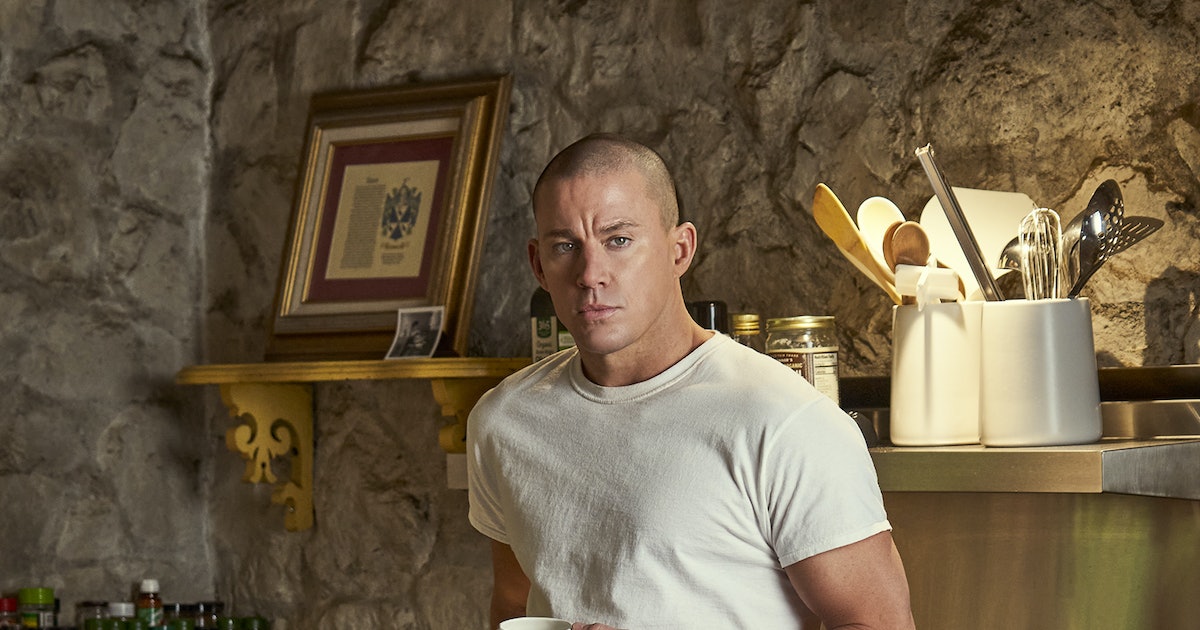 
He’s been a G.I. Joe. An Olympic wrestler. A street dancer. A cop posing as a high school student. The most magical of Mikes. He’s also worked with Tarantino, the Coen Brothers, the Wachowskis, and Soderbergh. But Channing Tatum says the most demanding creative project he’s ever been a part of is being a dad to his 9-year-old daughter, Everly.

“I’ve never been more creative in any movie or any creative venture I’ve ever done than I have been with my daughter,” Tatum tells Fatherly.

As a new dad and then a single dad (he shares custody of Everly with her mother, Jenna Dewan), Tatum knew connecting with Evie was crucial. He grew up in Alabama and Mississippi with a strict Southern patriarch. Though Tatum says they get along now, as a kid, he butted heads with his father and didn’t want the same friction to define his relationship with his daughter, whom he calls a “born contrarian.” So, how does a dad reach his headstrong little girl?

“My experience was to go into her world and be there with her,” Tatum says. “If she likes dragons, I’ll go be a dragon. If she likes witches, I’ll become a warlock.”

Today, Tatum and Evie have an inseparable bond that served as the inspiration for the sweet, hilarious, and New York Times bestselling children’s book The One and Only Sparkella, illustrated by Kim Barnes. The titular character is a creative and shiny young girl whose sparkly personality and individuality sometimes puts her at odds with her peers. It’s both an ode to being yourself and to father-daughter relationships.

Now, Tatum has released the sequel, The One and Only Sparkella Makes a Plan, which sees Sparkella and her dad crafting a princess castle for an upcoming playdate. It’s full of the same offbeat humor and magic and, again, the father-daughter relationship takes center stage. (A live-action Sparkella movie, with Tatum in the dad role, was also recently announced.)

Fatherly spoke with Tatum about Sparkella, the most important skill he’s teaching his daughter, and the best parenting advice he ever received.

Congratulations on the new book. Sparkella’s been out in the world for about a year now. Obviously, the books are for Evie. But who else did you have in mind when you were writing them?

Well, the first book really came from me becoming a single dad and trying to figure out how to do that. I wasn’t sure what to do with a little strong little girl. I grew up very, very, very different from her. So, I was nervous. And I watched her go through some of these very pivotal, very seminal moments of a child — being self-conscious for the very first time, trying to navigate expectations for the first time. So, I think writing these books is my way of trying to get specific about what I’ve learned because being a kid is messy. And learning to be a parent is probably messier than being a kid.

I was afraid because I didn’t know how to be the dad that I wanted. I just wanted to do a good job … whatever that meant.

Right. Kids have a very intense, very specific experience. They’re just in it. And as parents, we have our experience, we have their experience, and then we also have the larger sort of like a heady thing of trying not to be self-conscious. You’re constantly thinking, All right, what’s the world going to think?

But I’m just offering up my experience. My experience was just to go into her world and just be there with her. If she likes dragons, I’ll go be a dragon. If she likes witches, I’ll become a warlock. It’s really sort of that simple.

That makes a lot of sense.

With the first book, I was more just sharing my fear and then ultimately what worked for me. I don’t have a fear of connecting with Evie anymore. We’re the best of friends.

That’s great to hear. The latest story centers on Sparkella and her dad building a princess castle. But it’s really about a little girl dealing with big expectations and her dad trying to modulate them with her. What’s the big takeaway you’d like parents to have?

I had to watch my daughter have big expectations. We were building a birdhouse and I was so excited. I was like, “I’m going to build the best birdhouse you’ve ever seen.”

And I had all these ideas. But Evie came out and she had her idea of exactly the way she wanted it to look. And I looked immediately at her plans and thought, “Oh, we’re sunk. We’re never, ever going to be able to build this out. Her version’s never going to work.”

But instead of trying to control the situation to something that we could manage, I really just had to let her go on her journey, and really figure out what did work and what didn’t.

There was a lot of watching her have the wrong wood and saying, “Baby, that wood’s not going to work.” And her saying, “Yes, it will.” But I was just along for the ride. And she’s just banging on stuff and it’s falling and breaking and everything just goes wrong. And I had to just sort of be there along with her, along for the ride.

And how’d the birdhouse turn out?

We have an incredible birdhouse right now. We haven’t hung it because I don’t know if any bird’s going to want to live in this thing. But it is the craziest looking, coolest art piece birdhouse that you’ve ever seen. It’s all bright and definitely all Evie. So, my big takeaway is to just sometimes go along for the ride.

They come out who they are. You got about 10% to 15% on either end to affect the whole. As long as you love them, you’re going to be fine

Speaking of going on for the ride, you’re very open about dressing up for Evie and wearing princess attire. It’s great to see. But for those dads out there who might find the cuteness you’re embracing a little embarrassing, what do you say to them?

You don’t even need to be cute. You could just put on the dress and still be yourself. And it’s just going to be even funnier to them. Like you could be as grumpy and as tough and whatever as you want to be, wear the tiara.

But I wouldn’t know what to say unless I knew exactly why someone would feel uncomfortable. But for me, being silly, it’s just being. I’m an actor. So, I have no problem being a clown. It’s sort of par for the course for me.

I totally understand why it’s not as easy or intuitive for somebody else that just doesn’t live this life to come home from a hard day’s work, whatever they do, and play dress-up.

But she knows when I’m not being really creative because I’ve given her too much too early. And I tried too hard too early, and she’s just like, “Dad, you’re phoning it in,” or she’s like, “Come on, play for real,” when she knows I’m phoning it in and I’m just tired.

What do you think makes a good dad?

That’s such a hard question because it’s such a spectrum. I’d say the will, the want to show up, and just be present.

I had my own complications growing up, and I think I was afraid because I didn’t know how to be the dad that I wanted. But I just wanted to do a good job. And I just wanted to show up and whatever that meant.

But I think that you just try to do as much as you can. I think as long as you’re engaged with your kids on any level, you’re going to do the best job that you know how to do at that moment.

You’ve been a parent for almost a decade now. What’s the best part of the experience for you?

I’d say when they notice the little things. When I was reading books to Evie early on, I would start doing all these voices and she’d say, “Can you just read it? Don’t do all that stuff.”

It would always break my heart. I’d be like, “Ah, I can do all this stuff and you just want me to read it?” I wanted to do more.

And then I remember I went and read at her school for the very first time, and I start reading normally. She’s like, “Dad, can you do the voices?” And I was just like, “You do like it!”

Those weird, tiny little moments where you kind of get to reflect. Because you’re just in it so much as a parent that I don’t think it’s almost impossible to kind of take in being in the moment.

It can be hard to zoom out.

Yeah. So, I think when you just get to look back and reflect and kind of remember those moments where they might have been frustrating or whatever, and they’re just so gratifying because you know that you’ve had an experience with someone that’ll never forget you.

You have a lot of skills. Is there something that you’re excited to pass down to Evie or that you’re currently trying to teach her?

I love that. One thing parents receive a lot of is advice — both good and bad. Is there a piece of parenting advice you’ve received that’s stuck with you?

This is the thing that popped into my head. We hadn’t had Evie yet. I remember I was kind of stressed about becoming a dad, and I was on set talking to someone and said, “I’m having a girl… I feel like I’m going to screw this up.”

And this guy says to me, “I have four of them.” And I said, “Yeah, how’d that go?” And he’s like, “Look, let me just say this. They basically come out how they’re going to be. They come out who they are. You got about 10% to 15% on either end to affect the whole. As long as you love them, you’re going to be fine.”

And this was just a guy on set?

Yeah, a random person. I think he was an extra.

At the moment, I didn’t really know what he meant by that.

But the advice stuck with you.

I had Evie and I really understood what he meant because Evie came out who she was. There was so much already in the software that I didn’t teach her. Like she came out a born contrarian before she knew what an opposite was. Her instinct is to just do the opposite. If you want her to do this, she’s going to want to do that. If you say “stop,” she’s going to go. That’s just her. She’s built that way.

So I do believe there’s a certain part of kids that comes with the package. Like it just comes already predetermined. And as a parent, you have to teach them how they get to see you experience the world and how much you love them. And that 10% to 15% on either end of the thing is a lot and it can affect a lot.

But I think that was good advice. To not worry about doing so much other than making sure that she’s loved and that she knows she’s loved.

The One and Only Sparkella Makes a Plan is out now.

23 ways to celebrate the Fourth of July for kids

How to Talk to Your Partner About Going to…

How To Deal With Teenagers. Andy Woodhull